My friend Abel Harris said to me one day "I am Abel, you know like in the Bible? I am my brothers keeper." and was shot in the head that very day by a cocaine crazed jerk in a heroic effort to save other people and "Be his Brothers Keeper".

Cain and Abel,... Am I my Brothers Keeper?


"Hey, I am Abel, you know like in the Bible, I am my Brothers Keeper" Abel said. The game of hearts included Gypsy Blanchette, AJ Wachtel, David Brass, Abel and several other Boston Heavy Metal fans. We all sat in a circle in the living room of my apartment at 1353 Beacon Street #2 in Brookline. My Nine room rent control had become the after-hours hot spot of bunrattys bar to Peter Thompson's displeasure. It was a slow evening, things had actually calmed down enough towards dawn that Abel pulled out a deck of cards and started a game. Now wait a minute I replied " Are you crazy? They don't pay you enough for that!. Abel your a Bouncer, don't let it go to your head and do something stupid". "No I mean it", Abel continued getting a little full of himself, "I am responsible for those people in that bar. If someone comes in with a knife or a gun or whatever, that's my job, I got to handle it". Gypsy suddenly interrupted "Yea OK Abel, ...you go ahead and save the world... but Deal the Damn Cards" !! A word from on high ended the discussion for the moment...Gypsy was the Queen Bee of bunrattys, the ruling social queen of the Heavy Metal scene, if that's possible in a bar whose social scene ran at the speed of a universal cocaine high.

Abel was in his prime. I liked Abel, Just about everybody in our crowd did. He reminded me of myself in the days when I ran the Student Government at college. He was about the only black guy in the bar many evenings, but he carried it off well. Somehow he managed to keep a sense of himself in the rarefied atmosphere of the soon to be famous Boston Heavy Metal scene. He was someone you could genuinely trust, in a crowd of people that defined the term outrageous. He took great delight in his new found position of social standing, not to mention in the attentions of several of the bars finer women. Still, Gypsy's slight seemed appropriate, the status, the drugs, the attention and the women had Abel overestimating the situation, or so it seemed to me at the time. After all, even tho he had replaced the fisticuffs of the previous regime with psych and tact successfully, it was after all still just a Biker Bar gone Metal in a non descript backwater of the Boston Scene. The use of the term "Responsibility" in the context seemed overplayed for sure. Who knew so many of the regular Bunratty acts would rule MTV's early years three short years later. 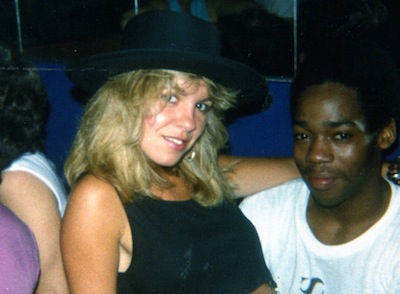 The evening wound down and everyone slowly got themselves out the door and I went to sleep. The next evening after the days work, I landed again at Buns, for almost three years I never missed a night. It was a rocking good night. The place was packed.

I was standing at the end of the Bar away from the stage near the door between the slats and the bar when the first shot rang out. I have always been blessed with quick reactions to dangerous situations and was in a crouch and half way down the bar before most people realized what was happening. The band kept playing for the first several shots as the crowd started to react ...slowly at first. I looked over my right shoulder across the crowd as I made my way down the bars length while the Gunshots continued to ring out. Somebody was standing on the entrance landing shooting a gun into the air, bullets crashing into the ceiling above the crowd. One shot, two, three and by four I was near the end of the Bar and trying to figure out where to go next to avoid being trapped in the Men's room. I had no idea what was happening other than that it was definitely time to go... During that last quarter of the bars length the crowd was now crouching and moving toward the stage in a mass. The people looked like stalks of wheat being blown by a ferocious wind all bending and moving in the same direction...away from the gunman. One figure, standing straight up, his head feet above the crouching crowd, was moving in the opposite direction against the crowd and toward the gunman. As he traversed the last ten feet he began to hold his hands up in the air, palms open and toward the gunman. It is a sight I will never forget. Fortunately for my sleep at night I missed what happened next. I was too concentrated on survival to play the tourist on this one. Those shots were real and the paced two and three second intervals seemed to carry an incredible terrifying threat.

The Gunman emptied his gun into the ceiling... all except for that last shot. As Abel made his way up the landing to confront him, feet away from the barking pistol, now alone and standing by himself, James Wallace dropped his hand and shot the last rounds directly into Abel's head, then left the bar running like the coward he was. James Wallace...the scum... with the snout full of cocaine murdered Abel, August 1, 1987.

When Abel Harris said "I am my brothers keeper" sitting in my living room at sunrise on the very day he was shot...he, unlike almost all others who ever uttered that phrase... really meant it.

God be with you Abel.


But Cain had words with his brother Abel, and when they were out in the field, Cain assaulted his brother Abel and killed him. Then the Lord asked Cain, "Where is your brother Abel?" He said "I do not know. Am I my brother's keeper?"

The next morning after spending all night at St Elizabeth's Hospital in Allston I wearily returned home but although exhausted could not sleep. I called the newspaper and told them what I had seen. The

reporter had not a clue and the paper was going to just note the event in a paragraph on Boston Crime. We talked for about half an hour as the sun came up. The reporter mangled most of what I said that morning, and attributed some quotes to me that were not mine. But buried in the

extensive quotes is one of particular interest from our conversation the night before. It is a paraphrase of what Abel had said the night before. "Hey I am Able, you know like in the Bible... I am my brothers keeper... if there is a problem in the bar I have to handle it". The Biblical part of the quote was dropped, perhaps it seemed unfashionable at the time. Most of the talk over the next few days was over the very last hand Abel held as the guys were trying to goad the girls into a round of strip poker at the end of the evening... Aces and Eights. Someone pointed out the myth of the "Dead Mans Hand", and Able put the hand down with a laugh announcing "That's it, I'm outta here on that one" and everyone left. The evening was over. It was now Sunrise of Abel's Last day as he made his way from my apartment.

Over a hundred of Abels friends came together on April 19, 2015 and raised enough to fund the scholarship to its thirtieth Year. People came from all over the country, I came the farthest, from Seattle to quite simply, gather with the most wonderful set of people I ever knew.