The histrionics of small things 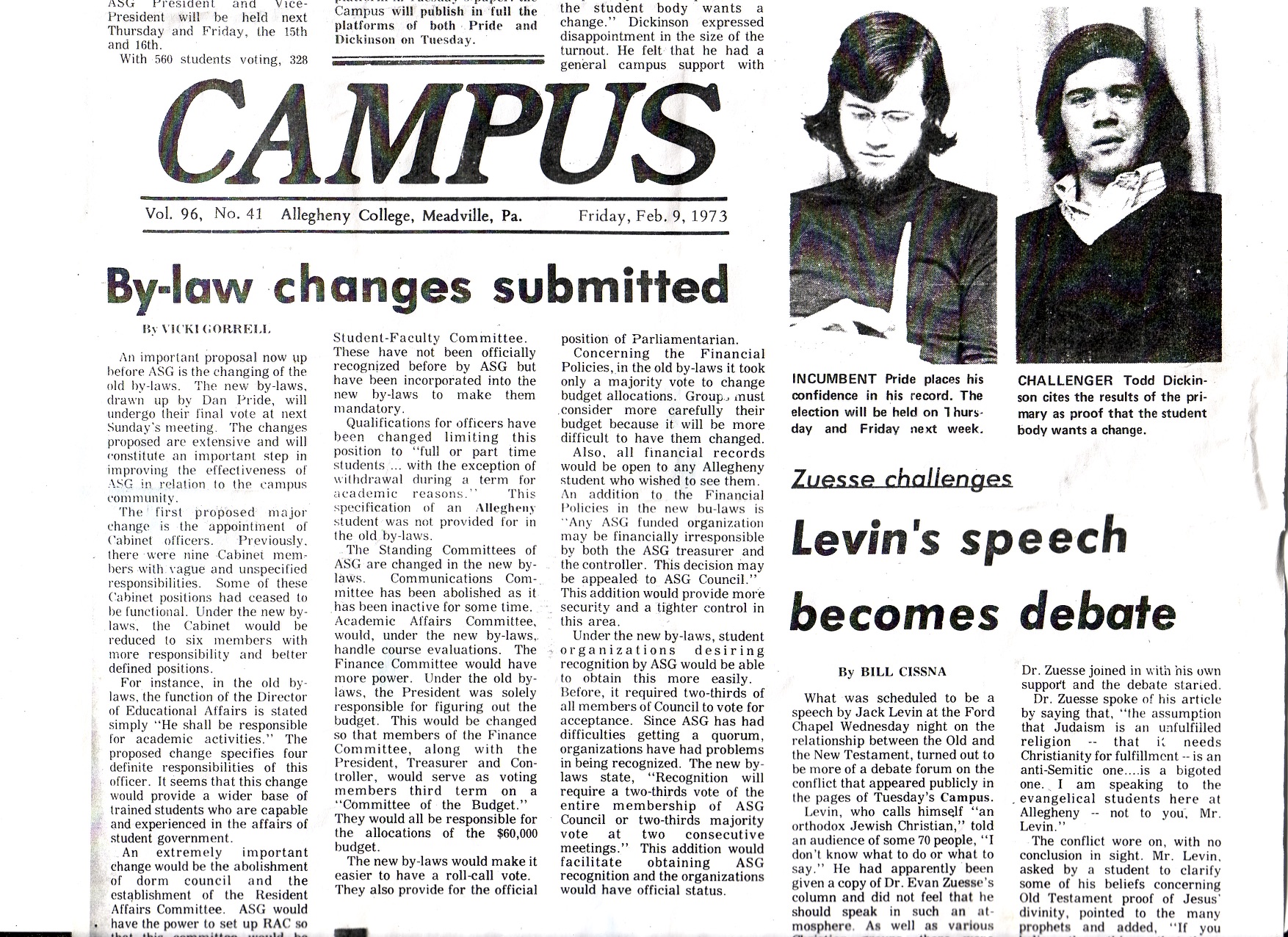 Its "nice" that Q Todd rewrote the bylaws of the tiny Sigma Alfa Epsilon Fraternity, I had no idea my complete rewrite of the Student Government bylaws and its Student Body wide referendum (which resulted in his second defeat in 1973) had such an exemplary impact. In fact I had entirely forgotten about it.

At our 25th anniversary at Allegheny, as I shook his hand on the steps of Bentley Hall to congratulate him on his appointment by President Clinton, I said "See how much good it did ya to have me kick your ass twice. eh? eh? eh?" smile smile "See...things always work out for the best in life".

I expected a laugh, I got a grunt. It was the first of several brief encounters that weekend that caused me to put it all together. I had left everything about Todd Dickenson far in the rear view mirror years ago,.. and I had never sat in the Oval office nor testified before congress. My fame extended to a handful of highly paced tech corporate types, and recognizable numbers on a half dozen fortune 500 companies bottom line. Beyond debates and committe meetings I never had spent any time with him socially, my memories were of beating him in two elections and in every Council vote for two years. No hard feelings on my part, I was truely pleased when I found out of his elevated position, and quite ready to bask in the reflected glory and toast his success.

But its a common pattern I see all the time in "the haters", and I attribute it ot the Gate. In them there is a vehemence and a persistance that always surprises. In several cases people literally rearrange their lives over what seems meaningless to me. Its perhaps a sense of the relative distances of the divine in lives. The further they are the more intense, the more vicious the reaction. Its usually an instant thing, of course with Todd there was a history, a student history years ago.

To see those comments that "things work out for the best in life", parroted at the bottom of his Alumni profile was stunning, his entire summary of his professional accomplishments which are considerable and far beyond mine, gets second fiddle to the fraternity bylaws and "Things Work Out for the Best in Life"? Divine resentment, or just a matter of a gay Dickinson's resentments at the college community he hid from while attempting to lead it and the added jealousy created by what won't reach where :(

They say its good to walk in another mans shoes, but when I now think of Todd its of a man who needs to dominate to feel whole and worth anything, with a weener that won't reach, stuck on his stomach for gratification. No thanks, think I'll keep my size 11's :) But the roots of the viciousness almost become understandable when I "try on his shoes". Just glad its not me, it seems to have a little of the flavor of being cursed by God.

I guess all those whispered jokes at Allegheny
about size abnormalities
must have been true after all.
Todds Own Joke

As regards the commercialization of Life and the ownership of Genes I have to go with the Bible on this one. Todd's role in the patenting, ownership, and buying and selling life is striking in the context of all these events.

Then the Lord God said Behold, the man has become like one of us, knowing good and evil, and now, lest he put forth his hand and take also of the tree of life, and eat, and live forever" - therefore the Lord God sent him forth from the garden of Eden, to till the ground from which he was taken. He drove out the man; and at the east of the garden of Eden he placed the cherubim, and a flaming sword which turned every way, to guard the way to the tree of life.  The Holy Bible Genesis 3:23