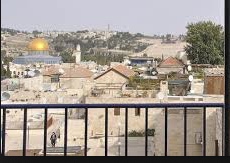 The Face of God

My only week in Jerusalem was at an end for this trip. I had spent most of it in the church of the Holy sepluchre reading the new testament for the first time. Reading it like I was cramming for an exam.

I kept looking to see if any of the Greek Priests were giving me funny looks and had felt reassured when they didn't. The old lady in Thessolonica musta just been having a bad day :)

At some point as I slept I began to dream, but this was somehow more than a dream. I felt as if I was in a huge space. A space filled with a thick smoky fog. Suddenly, a huge circular sun like face as big as a house came out of the fog with a rush more than filling my vision. I slowly scanned the surface of the face to the right and came upon an eye looking right at me. An eye very much like the eye of an elephant. The eye was intently watching me.

I sat bolt upgright, startled but not frightened, yet breathing heavily as if I had just run a mile. I shook my head, felt overwhelmed for a few minutes, then flopped back on the bed and back to sleep.

I began to dream again. A strange cartoon of a dream, silent, with the coloring of a Dick Tracy movie. I dreamed of a womans Labia open and aroused. A sudden burst of small white flowers burst forth like a chia pet ad. A Large finger penetrated and withdrew a white viscous substance revolting but without feature, smell or sound. I had no idea it was a prophetic dream, but it had an odd quality that made it hard to forget and easy to think about.

I woke up and dashed for Lod Airport just making my flight, having stopped too long at Gezer on the way. It had been a difficult trip, robbed of my wallet in the Paris subway and stunned at the worthlessness of my dollars, funds had run low after only a few months and it was time to cut the trip short and go back to work. I expected no problems, having my pick of several positions that were open upon my return.

All I had to do was get there.

I arrived in London on August 1st (again) and headed for the ticket counter to rebook my flight for the states. Greeted by a line of hundreds perhaps a thousand cranky passengers, I learned of the British Airways strike. All flights were full and the quckest flight I could get, without buying a new ticket, was my existing ticket more than thirty days out. I was stuck. Stuck in the most expensive city in the world with funds dissappearing and everything but my passport and a few travelers checks made off with.

I found the cheapest hostel I could take in Earls Court and sat back to consider my options.

During breakfast the next day two czecks were discussin their summer jobs they were about to start in some place called Wisbeck north of Cambridge, picking flowers piecework with housing. Flowers? hmmmm. How bad could it be for a month? ...and I got to spend more time in England, a big plus in my eyes. I decided to go for it, they were nice guys and it sounded like an Peace Corps class adventure.

So began life as a British farm hand.

It required a few adjustments, mostly living with 8 Polish students, me and the two czecks in a two bedroom bungalo, but after adjusting to the arrangements, it was, mostly, fun.... All except the daily toil.

You would think that there could be no more pleasurable labor type work than picking flowers. But the first look at all the beauty soon gave way to the awareness of the pesticides that drenched the fields.

I told my coworkers of the dream, and its odd coincidence with labor, and I began to wonder if the second part would somehow manifest itself and if it did what would it be?

I always enjoy doing offbeat things that give me a new take and another slice of life and people. I was a minor celebrity in this environment. I was the only American farm laborer that they had ever seen working the fields. I also wasn't very good at it, but I also didn't really care, I was just killing time as a tourist of a different color.

I continued on my first read of the biblical text and wondered about the second part of the dream. Would it also come to something? Being an American with a US Passport, I became aware of being an object of interest to a number of the female workers who obviously saw in me a quick and legal way to their land of dreams... America of course. I rejected an offer of 3000 pounds to marry and continued to wait out the few weeks to my flight.

The answer came with a knock at the door from the tuft running the crew. He had a proposition for me. A steady hourly wage working in a factory if I would only drive his brother in law down the street to and from the factory each day. I readily accepted... quite sick of being daily poisoned by pesitides.

As I waited out the last two weeks til my flight I had a lot of time to think about the second part of the dream. Time spent thinking of the limits and of the abuse the agriculture industry was inflicting on the bounty of Mother earth. Time spend looking at an endless number of horrible white blobs. Time spend marveling at the prophetic qualities of the wierd and powerful dream.... Time spent picking rotten onions, ugly, white, revolting and viscous, off a conveyer belt as thousands of onions extracted from mother earth sped by.