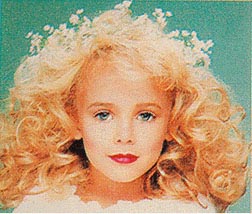 at Mac Reads house, and the ride back.

Wild Thing went from software to a description of a pattern of existence.

The long wait for the second bus, the Boulder transfer from Longmont.

Got a light ? I asked holding up my cigarette.

withdrawing from the question with fright and abject horror...

He stared back at me as we rode the midnight bus to Denver.

It felt better when he got off at the second roadside stop.

I still wonder about the red stains on the tan fleece Jacket.

For me he was no Santa Claus, but sometimes I stutteringly think he was.*

*Jan 20 2004 web rumors indicate DNA ruled out Phil McReynolds as a suspect in JonBenet's murder, leaving the significance of this event in limbo. The individual I asked for a cigarette light that night was 35 to 50 years old, emaciated, pot bellied, thin, about 5'11 and really terrified of something, perhaps just a schizophrenic having a bad day, perhaps someone who did not want to be seen. His physique reminded me of my father's after years of congestive heart failure. Vaguely cow boyish, He looked sort of like McReynolds from a two second flashed TV photo I saw years later after he died. After the encounter while waiting for the bus, the skitz boarded it also. The jacket had a ruddy stain about two inches wide and five vertical center chest left, the heart area. He sat one quarter the way back on the midnight Denver greyhound bus from Boulder that night on the right hand side. The individual constantly looked back over his shoulder at me (sitting half way back on the left) giving me the evil eye repeatedly and making me very uncomfortable until he got off at the second stop.  (the highway intersection, I think?). James "Mac" Read, a fellow software (4D) developer at US West, had put me on the 6 o'clock bus from Longmont, It missed the connection, I went for coffee and missed the 7/8 and the 9/10 bus never showed that night leaving me with an unlit cigarette in the boulder station around midnight. Weird. An odd time for ME to be stuck in the Boulder Bus Station...minutes after JonBenet Ramsey's Christmas day murder a few blocks away a few minutes before. Board Comments The slaughter of innocence linked to the anniversary of the birth. (but no Herod in sight)

After they had left an angel of the Lord appeared to Joseph in a dream and said "Rise! Take the Child and His mother and escape to Egypt. Stay there until I tell you, for Herod is about to search for the Child in order to murder Him"