The Habemus Papam completes...
(The Book is closed)


It started with a prophetic dream. A dream of me... standing in St Peters Square with a flock of several dozens of birds flying around my head in a tight 30 foot circle, just like what had actually happened Piza two years earlier as I made my way to Vatican City for the first time. But in the dream the birds were anointing me Pope.

An odd dream for a former Lutheran.

Most of my dreams are forgotten by noon. Not this one. I could not get it out of my head. It became a daydream of the glories of papal infallibility, what great things for the world a pope could do. Population control, distribution of income, help for the poor... the things you could do for the world by just declaring them seemed endless. Absurd of course.... but a nice fantasy nonetheless. Geez and that great apartment and rent free ! :)

Still, even without the fantasy, the dream kept replaying in my head. What did it mean. I had had an odd feeling visiting the Vatican two years before. Standing in St Peters square if felt somehow like it was mine, or like I somehow belonged there. I watched as John Paul's health failed and found myself repeatedly checking the price of flights to Rome from Minneapolis. I started to think about moving there, but the thought of going someplace cool to wait for someone to die seemed unseemly so I put it out of my mind.

When John Paul died I watched the overwhelming crowds and was thankful I had resisted the urge to go, but at the same time was overtaken by a feeling of near panic. I was going to miss something important. Somehow it seemed like I was supposed to be there. I listened to the TV talk about a Revelations event which had been prophesied for a thousand years to happen at this election, and wondered what it would be.

As the funeral came to a close I decided to throw all caution and financial prudence to the wind and go. I rationalized it to myself by saying there was so much of Rome I had not yet seen,... the time would not be wasted.

It would be exciting to be witnessing history, but there was also this expectancy, somehow something interesting was going to happen, I was sure of it ...but what could it be?

I arrived in Rome two days before the conclave and began spending the days in St Peters square. One of the crowd awaiting the white smoke.

I sat and read biblical passages, talked with all manner of people and awaited the event that was sure to come.

I read Ezekiel the first day, John the next morning, and in the afternoon switch to Revelations Ten. I had just completed the passage leading to the End of times events...

Then the Angel whom I saw standing on the sea and on the land lifted his hand heavenward and swore by Him who lives for ever and ever, who created the heaven and what it contains, also the earth and what is in it, and the sea with everything in it, "There shall be no further delay; but in the days of the seventh Angel's trumpet blast, when he is at the point of blowing it, the mystery of God will reach completion in agreement with the good news He gave His servants the prophets."

Then the voice from heaven which I heard addressed me again and said, "Go and take the little, opened scroll that is in the hand of the angel who is standing on the sea and on the land" So I went to the angel, asking him to give me the little scroll.

He told me, "Take and eat it! It will be bitter in your stomach, but in your mouth it will be sweet as honey". So I took the little scroll from the angels hand and ate it, and in my mouth it was as sweet as honey, but when I had eaten it, my stomach was made bitter.

I looked up at the chimney and noticed a single bird landing on the pole above it,

the smoke coming just as the bird touched down and then flew away. I instantly knew that it was what I had been waiting for. As others excitedly debated its color, somehow,... I already knew it was "blanco" and headed for the front seats. It seemed like a small thing to travel so far to see, but the moment I saw it I immediately related it to the dream. It started me walking toward the front. 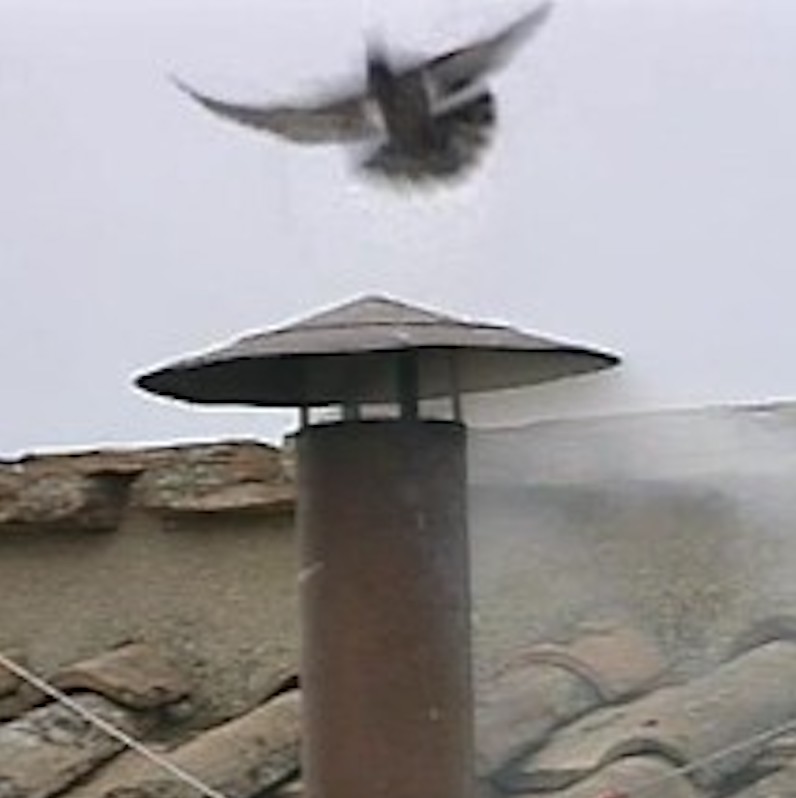 Compared to the grandeur of the dream it seemed like a small scroll indeed, but it felt good somehow, somehow oddly satisfying.

As I waited for the announcement my stomach began to ache. Perhaps it was the subliminal suggestion of the passage, or maybe just the wild turkey and expresso I had before heading back into the square.

I watched the proceedings and left the square, unaware that as I stood there unconsciously stretching and rubbing my painful stomach, and then again as I applauded the announcement, my picture had been sent around the world on every channel... CNN, MSNBC, ABC, CBS, Vatican TV etc etc etc.

They had announced the Pope, closed the book, and then it was my face flashed around the world... the camera transfixed for a long, strange, 12 second shot of me, singled out from a crowd of a half million...a long receding shot reminiscent of "Digging for the Truth", standing on the spot where Mehmet Ali Agca shot John Paul ... and only later the face of the designated pope.

Meaning is a subtle thing, its easy to look for it, and see it where it may not be... but the events convinced me to continue writing these stories down as they happen. To keep recording for whoever has an interest,... what happened after the first proof of a biblical passage. Perhaps I was meant to "continue prophesizing",... to be truthful,...

...it felt like a very private nod of approval.