"Nathan the Prophet"
From the Front Page of the New York Times
Oct 7, 1993

I unwittingly scratched the Nathan R note into the envelope of a letter which was used to Pre-announced two bombings and was mailed to the New York Times. The letter was postmarked the day after the bombs were mailed, and the day before they went off. The photo above is the Front Page of the New York Times. The note was written with a Pen with no ink on Dettling's Desk by me in Saratoga, California. I have passed a Polygraph that I remember writing it, and my handwriting is below. The note was initially identified by me as mine from Typeset Newspaper copy, and only later from the predicted visual handwriting match, leaving zero doubt as to its true authorship. 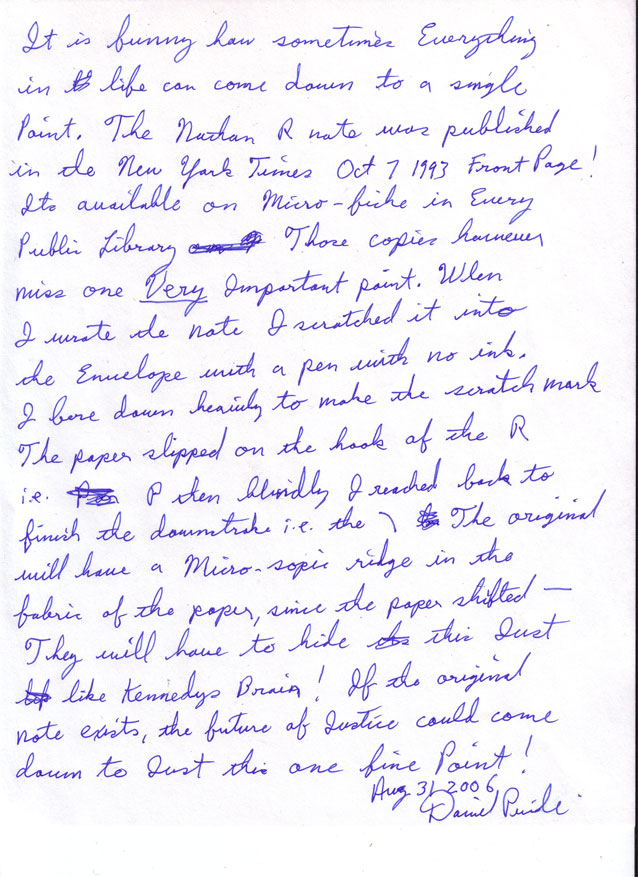 More about the Note

Numerous other Possible Sources of Handwriting Predating the Note
Note:Predated Handwriting will be an even closer match than handwriting post 50 years old.


Documentary Sources:Any New York times Microfiche machine at any Major Library will include the Oct 7, 1993 ,issue

Are Coincidences the Rosetta Stone of God?